Currently, Pulselyre does not contain any in-app 'help' or usage instructions. For now, please refer to this page for information on how to use Pulselyre.

Pulselyre is software for DJs and producers who want to create electronic music live, from basic musical elements, instead of playing pre-produced tracks. In a typical scenario, you start with a new layout for a song you wish to create or perform. A layout encompasses the rhythm pattern and the arrangement of instruments that you intend to use in that song, such as drums and different synthesizer sounds. (You could also reuse or expand on a previous layout.) Start by adding new positions to the layout (the + button in the top men bar) and changing each to the instrument you want in that location (the Gear button). You also need to configure each instrument for the number of beats you intend to loop its notes over. Loop durations are based on the layout's rhythm pattern, as seen in the metronome at the top of the screen. Rhythm in Pulselyre is organized into 'levels', where the top level is the number of beats per bar and each lower level is a multiple of the one above it.

For example: the default rhythm parttern is similar to 'four-on-the-floor'. It has three levels, each with four units. The top level, where each unit is one beat, has four beats; thus, the indicators light up and fade on each beat. In the second level, each unit represents one full duration of the level above it: four beats. Therefore, the second level indicators light up and fade over four beats. Since there are four units on the second level, each representing four beats, then each unit on the third level thus represents sixteen beats. A layout's rhythm pattern can be changed by opening the Menu and selecting "Change Sequencer".

To configure an instrument's looping period, use the Increase/Decrease buttons in that instrument's recording and settings controls (the +/- buttons with circular arrows). You will see the timeline bar increase and decrease in length or density, indicating how many beats that instrument is configured to loop over.

Once you have configured the layout and instruments to your preferences, you can begin recording sequences of notes for Pulselyre to loop back. To turn on recording for an instrument, press the Recording Enable/Disable button below it's Input Box (or press the global or row Recording Enable buttons to enable multiple instruments at once). The indicator on the instrument will switch from "Recording: Off" to "Recording: On". If you touch within that instrument's Input Box to play a note, Pulselyre will leave a mark on the timeline to show at what point within the loop period the note happened. If you wait for the timeline to loop back around, Pulselyre will repeat that note. A typical start to a song would be to set up two or three drum loops, each over one to four beats, and then add notes from other instruments over longer looping periods.

Throughout your song, you may at some point wish to turn off loop playback for a particular instrument. To do so, press either the Pause or Stop buttons in that instrument's controls. Pause will leave the recorded notes on the timeline, but not play them out loud (press the Play button to turn playback back on). The Stop button will clear the timeline of all recorded notes. Remember, you can always play notes on instruments without recording or looping them; just turn recording off before playing. 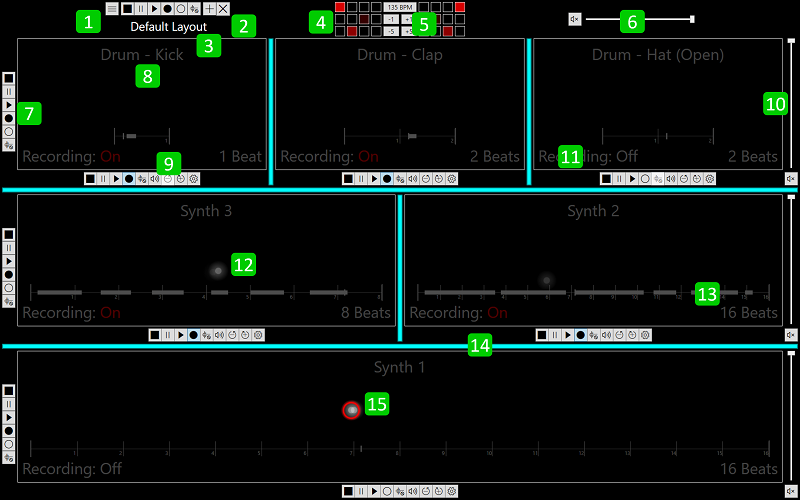 This portion of the guide is in development.